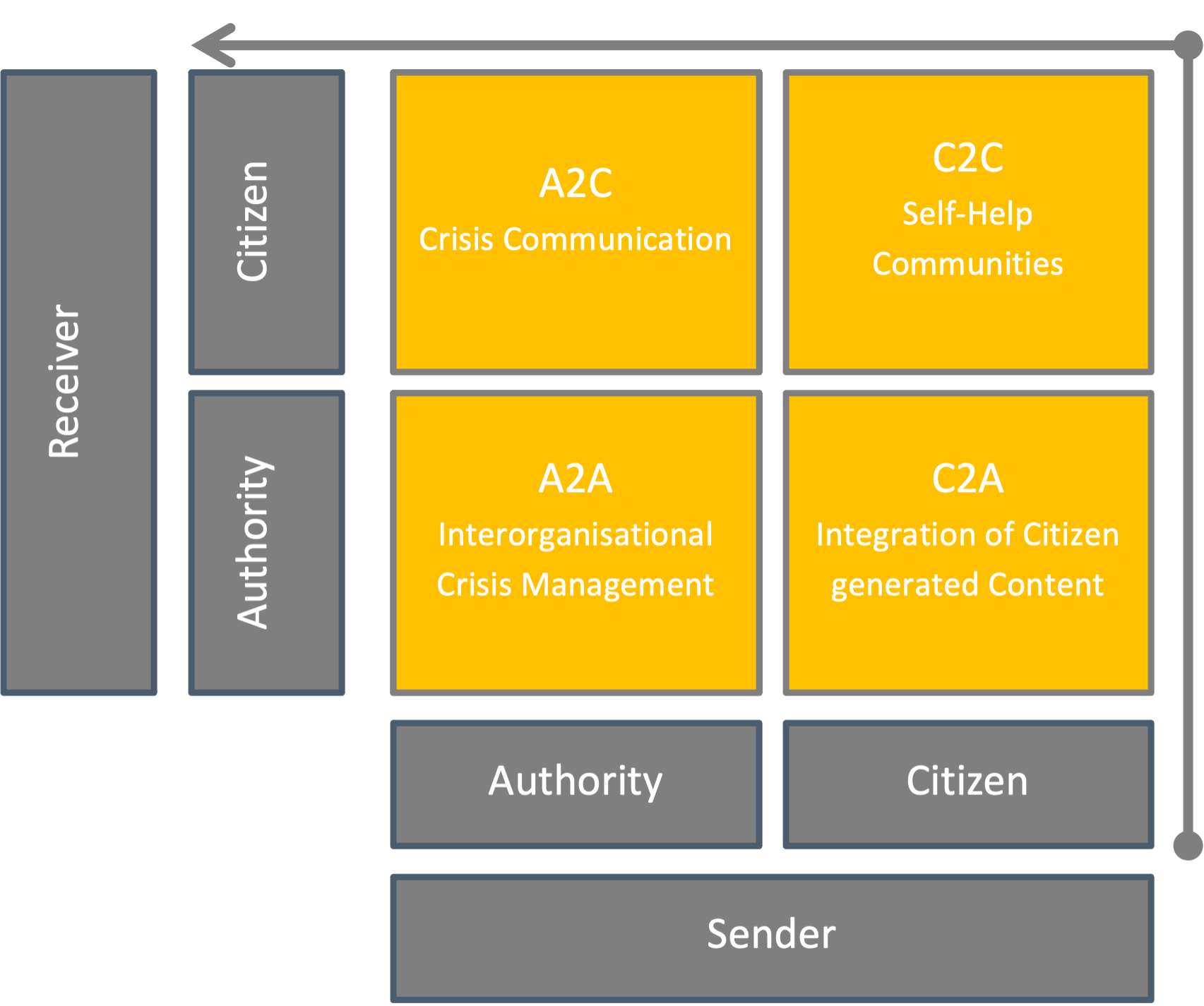 A fundamental description of SMCS-communication can be made by the Crisis Communication Matrix. The division of the DCT into the respective directions of communication creates comparability among the DCT and applicability towards specific aims in the draft DCT-schema.

A2C communication is the dissemination of information and official messages from public authorities to the public. In modern crisis communication public authorities increasingly integrate the use of social media in DMP (analysed in detail D3.1). The authorities are thus (at least in theory) able to provide the broad mass of the population with information via social media platforms such as Facebook or Instagram. Official bodies are thus able to support information channels such as warning apps (KatWarn , NiNa) or official press releases. For example, the London police used expressive communication through Twitter while riots were ongoing. Every relevant police action and information for the citizens was published. A comparative study (Denef et al., 2013) shows that this expressive approach allows a close relation to the public and increases the possible reach. On the other hand, it requires high maintenance and resources and the limit of informationen that can be legally published is quickly reached. The truthfulness of the information must be verified and no rights of persons or other organisations must be violated (Denef et al., 2013).

On the public level, citizens and volunteers communicate with each other, via conventional media like telephones or social media such as Twitter or Facebook. One goal is to support or inform each other to offer mutual help and support. These communication channels are usually not monitored, which means that authorities have no influence on the content and credibility of the information. Self-organized groups, in most cases, do not have direct and organized lines of communication to authorities or local DMOs during a hazardous situation. The communication gaps between these agencies can easily lead to problems in practice. Through a DCT, communication within the population could be monitored, controlled, and analyzed so that, for example, self-organized communities can be effectively involved in responding to and handling disaster situations. In this way, the potential and manpower of these groups can be optimally integrated. The emergency forces of the public services are thus supported in a meaningful way.

During the flood disaster that occurred in parts of Germany in the summer of 2021, several communities were set up to provide mutual assistance in the form of labor and donations or swaps of material via an online platform independent of authorities or organizations. The website https://www.ahrhelp.com is an example that was created in a very short time and lives from people's willingness to help. Either a request for help or an offer of help can be posted on this website. These offers can then be used to contact the person directly.

The inter‐organisational communication of authorities is often not supported by social media. Mostly official and protected information channels are used first as social media raises concerns about integrity and privacy, among other things. Social media could help to improve inter‐organisational awareness and informal processes. A2A communication is likely to play a minor role in DCT within the context of LINKS, as defined communication channels and means between government organizations already exist. The communication direction A2A has no overlap with Citizens and therefore does not primarily fulfil the project requirement to increase the resilience of citizens through SCMS. However, a potential could occur in the compilation of collected and structured data across agencies.

C2A communication works by collecting information and data from the population by collecting and analysing digital content such as news, videos, images, metadata and other information sources from the creators. The primary communication structure, which generates the actual content, essentially takes place at the C2C level. Accordingly, the data is used in two ways. The pure observation, collection and evaluation of social media activity, as well as the processing of this collected data, will be referred as indirect C2A (Reuter et al., 2016). In this case, the producer of information from the population does not actively participate in the acquisition of information by the authority. There are currently some software programs that collect and process the above-mentioned data and can be used by authorities and organizations with security tasks. Indirect C2A communication is the most common variant. It includes, for example, the evaluation of publicly available social media posts that are of interest to the respective DMO but are not addressed to them. Furthermore, as soon as people from the population are actively requested to send information and data to specific agencies for the purpose of C2A communication, this process is referred as direct C2A (Reuter et al., 2016). An example of direct C2A communication is the involvement of citizens in suitable early warning systems. Another example is presented by Romano et al. in (Romano et al., 2021). They present the use of a gamification app with which citizens can obtain certain information for the authorities. This is packaged in so-called missions and grants points for completing the tasks. The focus here is on the control of public places, streets, and other facilities. With the help of the citizens' reports, the authority can then initiate further measures to eliminate deficiencies or combat hazards.

All information presented on this page is an excerpt from Deliverable 4.1 of the LINKS project: